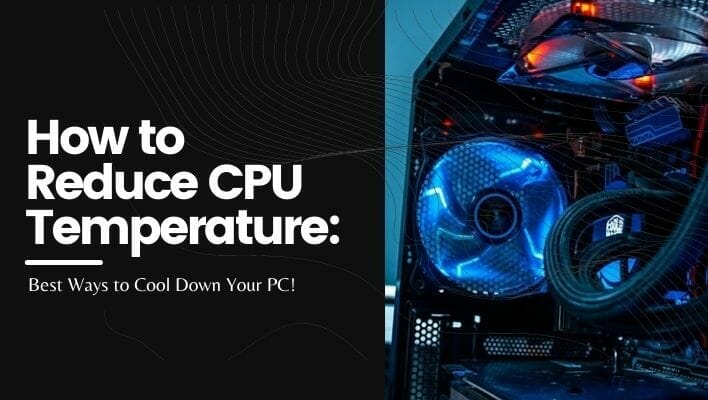 The most daunting thing to happen on a computer can be overheating. We should always avoid running our computer components in extreme measures of heat. Any electronic component, including computer parts cannot work optimally when exposed to increased temperatures. More crucially when the temperatures reacher the higher slabs, they can even ultimately fail the hardware component completely.

Similar, or more sensitive is the case with the CPU. It is imperative to assure that your CPU is running within a reasonable range of temperature.

What happens when a CPU overheats?

In today’s age, the newest computers are designed in a way that the system shuts when a CPU approaches a specified threshold temperature to prevent it from going up in fumes. Actually, this ensures that your computer is saved from further harm.

Another big reason for keeping the CPU temperature low or in check is that it also endangers the motherboard.

Despite the shutting down mechanism, overeating affects computer components, leads to reduced performance, and eventually absolute collapse of the computer. It is general with almost all electronic devices that less the temperature, the better the performance.
The most common reasons for the temperature increases are prolonged power consumption from the CPU or poor airflow.

We should always keep our CPU temperature in check because it is the key to our computer’s performance. To dodge this issue we wrote this article which demonstrates the ‘striking ways in which you can reduce your computer’s temperature’.

It is one of the most handful of ways to reduce your CPU temperature. Steady airflow inside your computer and around the CPU is mighty effective. Inside a computer case, different computer parts run in parallel and invariably give off heat which collectively builds up into a situation of overheating.

To avoid this scenario we must opt for a neutral airflow, this can be achieved by allocating intake fans and exhaust fans at opposite ends of the case. It is factored on your chassis whatever the case may be, you must always allow a good airflow mechanism.

Few tips to keep in mind,

Cleaning your computer case is divided into two phases:

for this whole activity, you would need several things such as compressed air, a vacuum cleaner, microfiber cloth, dust mask, cable ties, and a softer paintbrush.

A clean machine will see an instant drop in temperature measures, especially if you haven’t done it for a while. Basically, the internals of a computer gets dustier with time as fans continuously push and pull air, they typically gather dust.

This results in dust settling on parts, and with time the components get clogged with dust and eventually become stunted and ineffective. Regularly cleaning your fans and other components can keep them fresh and working wonderfully.

But there is nothing to worry about because you can clean your computer in few easy steps:

People usually don’t consider tidy cable management as a potential solution to bad airflow. The point is that the cables take a large mass of space resulting in bad airflow.

Maintaining your computer cables is not a part of aesthetics but is effective as it provides a large amount of space for airflow.

If you haven’t managed your cables in a while, this is the right time to revisit, most modern computers come with specified cable management compartments and for others, cable ties would do a great deal.

If your computer is neat and the airflow is good enough but still you’re suffering from higher temperature and overheating issues. In that scenario, a component upgrade is on the cards. However, it is not always a CPU cooler that needs a change, it can be a case fan, your PSU unit, or a thermal compound. You should always check on your CPU cooler and make sure that it is working appropriately.
if not! go for a new CPU Cooler best fitted to do the job for you.

Get a New CPU Cooler:

CPU Coolers get older with time and hence do not performs on par. Branded coolers are considered qualified but with time they should be upgraded. be fine but they are not as efficient as an aftermarket CPU cooler or fan. Getting a powerful CPU cooler should be fancied especially if your CPU is overheating.
A new CPU cooler will surely provide a huge impact on CPU temperature and would be a justified investment given that your computer needs an uplift.
if you believe that your CPU cooler is working correctly then the second thought of consideration should be reapplying your thermals.

Reapplying the thermal compound mostly does the job. We recommend that using a better quality thermal paste will be wise. At times, thermal paste dries out and possesses a thread to the CPU chip. A better compound will ensure better outcomes in shifting heat between the CPU and the heatsink.
While it is important to renew the paste, but at the same point right amount of thermal paste should be used, and have to be careful with applying.

Another fix that you should fancy knowing that your CPU cooler and thermals are perfect, reviewing your computer fans or opting for a new case fan.

So, here is another thing worth mentioning checking your fans that if they’re working ok?
You should review every fan on your computer, check if they’re working fine, is it working on fine RPM and there can be a thing that can be skipping its duty.
Therefore, replacing the old fans or investing in a new case fan can be life-saving. You will undoubtedly witness an elevation in cooling management.

If checking or adding few fans didn’t do any good, there is more to look forward to, and possibly that will sort things out for you!

Get a New CPU PSU:

A weak power supply unit can mess things up for you so it is required that you get a better power supply. Go for a modular PSU because that will ensure better airflow.
Make sure that you choose a power supply that perfectly suits your needs and is best suited for your computer.

1. How can we improve our PC performance?

At times a PC doesn’t perform up to mark, and it can be frustrating There are several ways in which you can fix a PC’s wicked performance.

2. What is the critical temperature for a CPU?

A critical temperature for a CPU depends on the CPU chip you’re using and the components it is matched with for example Heatsink, CPU Cooler, Thermals, and Fans.

Though, anything above 80 degrees level is unsafe, very critical for a CPU.

The moderate the temperature, the better will be your PC performance and basically, it all comes down to the components you’re using.

Talking about overheating, it is a serious concern and can cause damage to any computer. So, sorting this out is the need of the hour because extended use of a computer with overheating can cause the system to slow down and eventually fail. We talked about every possible resolution to this issue and this article will surely help you sort out this problem.

Keeping your computer cool ensures a steadfast computer as long as performance is concerned.
I hope this article guarantees a well-maintained computer in future. Thanks for reading, and believing that you find this post informative.

Quick and Easy Ways to Fix a Slow Computer