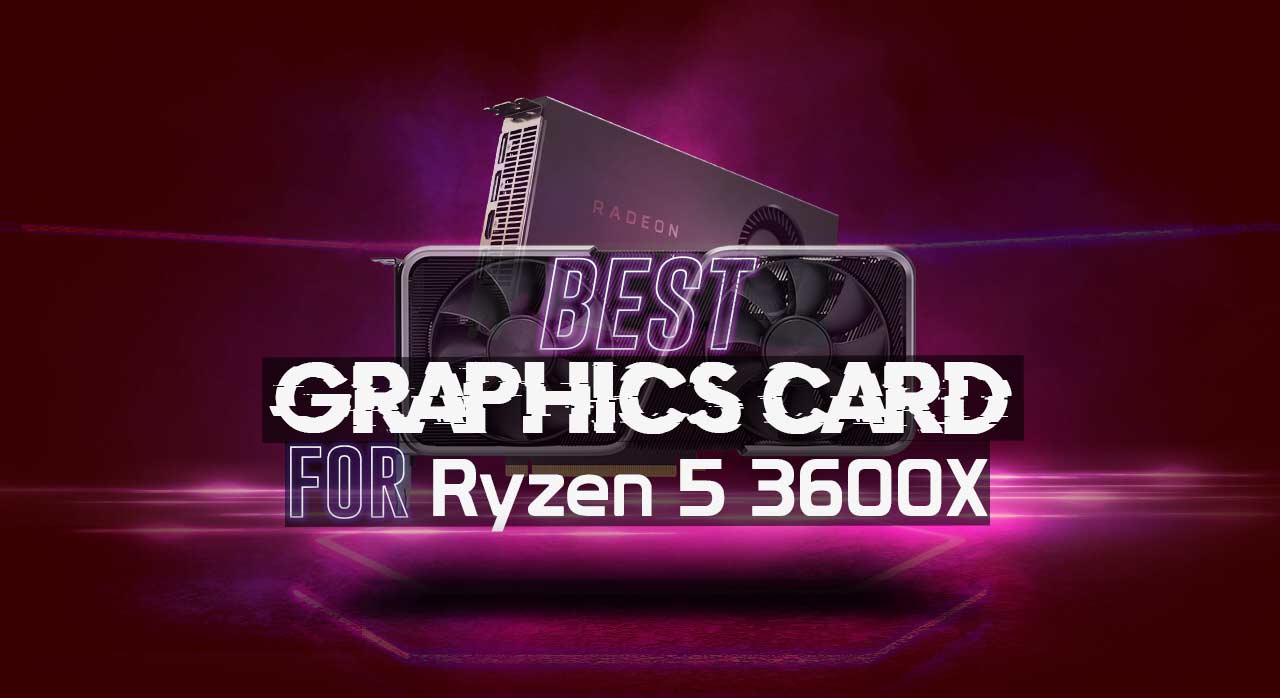 Chances are you’ve already decided to go for Ryzen Zen 2 processor, which surely has been offering fantastic and consistent performances throughout the benchmarks. And if you’re in the process of finding the best graphics card for your Ryzen 5 3600, you must have observed by now that finding GPUs are so hard right now or they’re extremely overpriced. The fact is, with the latest mining craze, the GPUs are in high demand.

But this shouldn’t hold you back from building a solid and powerful Ryzen Zen 2 build. To cut you some slack, we’ve curated a list of the best GPUs to pair with the Ryzen 5 3600. Each graphics card in this list is selected after thoroughly reviewing the build quality, features, and value. If you’re looking to round out your Ryzen 5 3600 build, check out the best motherboards and CPU Coolers for this processor as well.

We also ascertained that you do not come across any sort of CPU-GPU bottlenecking. Now if you’re a noob and still not aware of what exactly is bottlenecking, it is when either the GPU or CPU may not best match up and brings down the performance of the other counterpart, putting a limitation on the performance potential of your build.

Now whether you’re building a budget-oriented build or a high-performance build, we’ve also ensured that the list contains various options aligned to offer the best value proposition for your build.

AMD Radeon RX 5700 is an outright powerhouse, featuring competitive performance, plenty of features but most importantly, a great price-to-performance ratio. No matter if you’re all going for 1440p gaming or rugged content curation sessions, RX 5700XT will definitely be a welcome addition to your build.

With a VRAM of 8GB and a memory speed of 14 Gbps, this built-for-gaming graphics card escalates the performance-per-clock by 1.25x over its predecessor, compressing more performance even at the stock settings. Sporting the 7nm RDNA architecture, RX 5700XT features a base clock of 1605 MHz and a boost clock of 1755 MHz.

Another highlight of RX 5700XT is the inclusion of PCIe 4.0. Now if you’re doing your Ryzen 5 3600 build with an X570 or B550 motherboard that supports PCIe 4.0, you’d be able to notice a clear graphics performance improvement due to the boosted bandwidth speeds.

While NVIDIA is more focused on improvements in the hardware features, AMD has also worked hard to offer plenty of new software up to its sleeve. With image quality-enhancing FidielityFX and Contrast Adaptive Sharpening, the upscaling of graphics will appear far more clear and detailed. Simply put, even if you don’t plan on adding a 4K monitor to your build, these features will intelligently sharpen the upscaled graphics to a point where it will look nearly identical to the native 4K.

And to make sure there’s isn’t any bottlenecking, AMD Radeon Anti-Lag software will ensure that the CPU and GPU are completely in sync, cutting down on strutting and input lags.
Since there are only a few feature editions with the launch, you wouldn’t be able to find one right now. However, to help you out, we’d recommend  ASUS ROG Strix AMD Radeon RX 5700XT for gaming build or Gigabyte Radeon RX 5700 XT for a more performance-enthusiast build.

While AMD has taken a considerable lead over Intel in the CPU arena, NVIDIA is still bringing its A-game and Nvidia GeForce RTX 2060 Super is included in here for all the obvious reasons.

Contesting RX 5700, NVIDIA RTX 2060 Super combines all-around performance, excellent cooling, and above all, native ray tracing support. Powered by NVIDIA Turing architecture, The RTX 2060 Super sets in at a base clock of 1470 MHz and a boost clock of 1650MHz.

While there’s roughly a 14% bump in price over the non-Super editions, the RTX 2060 super brings over 13% more CUDA cores, a massive 33% increase in ROPs as well as memory bandwidth. With a memory bus width of 256-bits and a memory bandwidth of 448Gb/s, it integrates a VRAM of 8GB GDDR6. There’s also enough room for GPU overclocking with some benchmark results even hitting 1995 MHz.

And if these figures are a bit boring for you, let us make it simple and easy! It would let you tackle all the new game titles at 1440p even with 4K displays without any stuttering or loss in detail.

And the best part? Ray tracing will enable you to see the right reflections and shadows with even more clarity in the graphics-intensive games.

There’s a variety of after-market RTX 2060 Super to choose from. Based on our research, ROG STRIX RTX 2060 Super V2 is a clear recommendation for gaming enthusiasts, and for those looking for a more performance-centered model, ZOTAC RTX 2060 SUPER with its IceStorm 2.0 will surely blend the best with Ryzen 5 3600 builds.

When it comes to gaming performance, AMD RX 580 is certainly a breakthrough with great performance features, elegant design at a price point much lower than high-tier cards.

Although the RX 580 integrates the same number of stream processors as the RX 480, however, it features a significant increase in clock speeds. Since its launch, it has shown impressive results in gaming performance benchmarks, easily hitting 48-60 frames per second at 1440p in most modern game titles.

Built on a 14nm GloFo process with Polaris 10 GPU, it features 8GB DDR5 memory with a base frequency of 1257 MHz and a boost clock frequency of up to 1340 MHz. The only caveat for RX580 is its power consumption, with its TDP settled at 185 watts for basic models and some-200 watts on overclocking models. But this should be a tipping point since

AMD RX580 also integrates intelligent fan control, implying that the fans won’t be spinning at all under light workloads and will turn on automatically when you’re getting rough on the loads. This helps in ensuring your graphics card doesn’t throttle the performance and stays cool. The graphics card also comes integrated with Radeon Chill, which helps in regulating frame rates based on your gaming movements. Last but not least, the GPU is AMD Radeon VR ready for you to fulfill your ultimate VR realms and also integrates AMD FreeSync Technology to minimize all the stuttering in the games.

Our Review Process: Why You Should Trust Us

Here at OvrClock, we are committed to keeping our editorial and product recommendation processes completely independent from our monetization — so, you can always be sure we are recommending the best PC Parts for you without any partiality.

The OvrClock team has been reviewing all parts of a PC build for years now, and we use our expert opinion and experiences when making recommendations. We try to get our hands on and actually test all of the products we recommend, in addition to the dozens of alternatives that are not on the final list. This allows us to provide insights beyond what you can find from reading other online reviews, and get a true and more clear understanding of the best options. Our diverse team and vast experience also allow us to highlight each product’s ideal use cases, as well as the perfect customer profile for any given product.

For Graphics Cards, we test things including but not limited to: video memory, memory bandwidth, clock speedcore count, connectivity, core count, power connector size, and build quality, among many other factors. Our experience allows us to translate these insights into actionable conclusions and purchase recommendations for you, without you having to test all the products, or having to sift through piles and piles of data from our testing. All of the recommended GPUs and dozens of others not in this roundup have been tested with a Ryzen 5 3600 processor, and the aforementioned GPUs have been shortlisted based on their stellar performance with the Ryzen 5 3600 processor.

For any questions about our product selection and recommendation process, feel free to contact us.

The best value GPU for Ryzen 5 3600 in our experience is the AMD RX 580 8GB. While this graphics card may not be the objective best GPU, for its price, its the best value GPU out there providing you great bang for your buck.

When choosing a GPU for Ryzen 5 3600, consider factors including video memory, power connector size, memory bandwidth, core count, compatibility, and build quality, among many other factors.