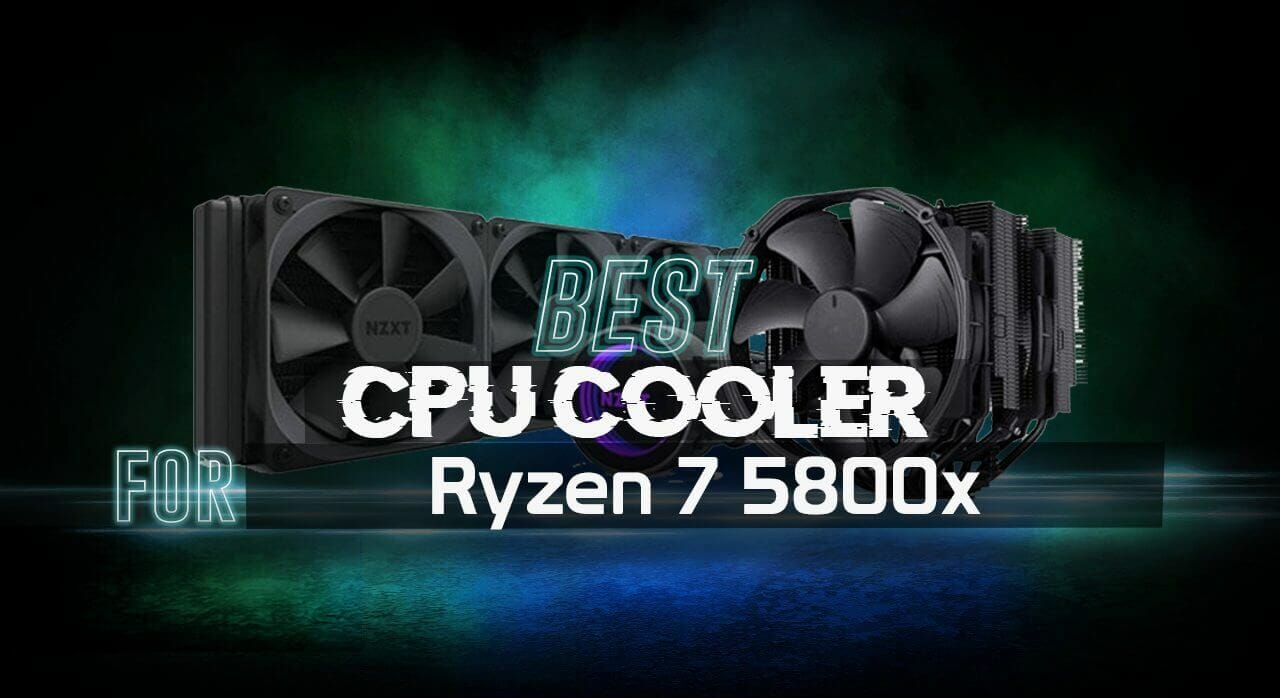 The Ryzen 7 5800x is an elite gaming desktop processor. It is one of the best-rated processors for FPS gaming. The AMD Zen 3 Core Architecture is the heart and soul of this very popular processor released in March 2017.

It is crucial to combine it with a reliable CPU cooler for this excellent processor to run smoothly. Here are several reasons why you need the best possible CPU Cooler for your AMD Ryzen 7 5800x processor:

Here is a list of some of the best CPU coolers for Ryzen 7 5800x. Each of the coolers has been hand-picked because of its exceptional characteristics. The common nominator of all the presented CPU coolers is the continuous stream of positive reviews since they were introduced on the market.

After going through these reviews, we are confident that you will be in a better position to choose the best CPU cooler for your Ryzen 7 5800x. We hope this will make your gaming experience as smooth as possible.

First on the list is the Dark Rock Pro 4. This cooler is served by two silent PWM fans featuring airflow-optimized fan blades, six-pole motors, and fluid-dynamic bearings. The air inlet and the front wings work in perfect harmony to provide the highest possible air pressure.

The cooling power of the Dark Rock Pro 4 is truly immense and can provide sufficient cooling to overclocked systems and highly demanding graphic cards. Its 250W TDP rating speaks for itself and can reach low temperatures even during long periods of peak CPU performance.

The Dark Rock Pro 4 design also plays an important role in keeping the heat out of the CPU. The airflow-optimized cooling fins come with small dots on top to improve the circulation of the air. Then there are the 6 mm copper heat pipes that increase the heat conductance. Finally, the black coating features special particles that are also there to improve the heat transfer.

The Dark Pro 4 has two pre-installed fans and two aluminum heat sinks, but it also has extra space for an additional 120mm cooling fan.

Next on the list, the ARCTIC Liquid Freezer II is a highly rated water fan cooler for PCs. Its very efficient pump, cool plate, and radiator separate it from its AIO competitors.

Unlike other AIO water pumps, the ARCTIC Liquid Freezer II has a pump that does not run at full load in idle mode. If no cooling is needed, the pump doesn’t run at full capacity, and by doing so, it consumes 80% less energy than its competitors. That’s important if you care about your electricity bill, as well as the environment. The PWM controlled pump power consumption is 4.3W at a maximum load, 2.3W at normal load, and only 0.8W when there is no load. Apart from the lower power consumption, the ARCTIC Liquid Freezer II also produces much less noise than its competitors.

PWM cables are nicely fitted into the sleeved tubing. There is only one small cable that goes from the motherboard to the pump. The EPDM tubing is reinforced with premium fiber, which means the water loop is sealed so well that there is no need to worry about spills.

The Liquid Freezer II cooler comes with a six-year warranty that starts from the day of the purchase.

The NH-U12A features two NF-A12x25 PWM 120mm premium fans, a massive surface area for excellent heat dissipation, seven heat pipes, and a redesigned heatsink. All these things make this fifth-generation Noctua CPU cooler so effective. Thanks to all that, the NH-U12A can even outperform even some 140mm size coolers.

Furthermore, the reliable SecuFirm2 mounting system enables easy installation on all CPU systems, including Intel. The Noctua high-end thermal paste is also a nice addition to this already highly-impressive CPU cooler. The push/pull dual fan configuration is the main reason why this cooler performs superbly and so silently.

Standing at just 15.8 centimeters, this cooler is the perfect size to fit in almost all mid to high-end tower cases. The NH-U12A is 12.5 centimeters wide, which includes both the fan clips and the cooler. It is compatible with most tower cases.

Last but not least, there is a six-year warranty attached to the NH-U12A. There aren’t many other CPI coolers with a warranty as long as this one. This indicates that the manufacturer is quite confident about the product’s build quality and that it’s designed to last for a long time.

This all-in-one liquid cooler is built to provide CPU cooling for the most demanding gaming machines. It comes with two 12 cm PWM fans that can provide between 400 and 2400 RPM in cooling. The two cooling fans are supported by an optimized pump that can provide excellent hydro cooling. The cold plate is also there to support the cooling process. All that contributes to quiet, high-performance cooling. The airflow is set at 75 CFM, whereas the noise level is 37 decibels.

The CORSAIR iCUE software comes with an interface that allows you to control various features such as RGB lighting, pump speed, fan speed, coolant temperature, and monitoring the work of your CPU.

The Corsair H100i cooler comes with its tool-free mounting bracket for easy and fast installation on all CPU sockets, not just AMD’s.

All in all, the fans and the RGB pump make a great combination. The arrangement will never fail to keep your CPU cool enough while you play your favorite games. It was brought to market three years ago, and the number of positive reviews is overwhelming to date.

The M22’s most exceptional parts are its new radiator fans that bring liquid cooling to perfection. They are highly durable, resilient, and powerful enough to cool off even the most powerful desktop gaming CPUs out there. In addition, its noise level is capped at 25 decibels which is also quite impressive. That means you get superior cooling while maintaining low noise levels.

The CAM software gives you full control over the Kraken M22 cooler. However, the software only runs on desktop computers running Microsoft Windows 10. Users can fine-tune the cooler and make swift changes either via mobile or the desktop app.

You can also use the CAM program to control the lighting effects. The wide range of available colors can be combined into all sorts of visual effects that will light up the CPU Cooler.

There is a three-year warranty that comes with the Kraken M22 CPU liquid cooler. The cooler was first introduced in 2018, and since then, it has got a stream of positive reviews.

The Kraken Z Series is regarded as one of the best products under the NZXT brand. This all-in-one liquid cooler is made to be resilient, reliable, and silent. Much of that performance is due to the dynamic bearings and the chamfered intake. Due to that, this cooler can keep your CPU temperature at bay even after long periods of gaming.

Branded as the Kraken Z63, this liquid cooler also comes with a customizable LCD. The 2.36-inch display can be customized to match the look of your cooler.

CAM’s software is a big part of this liquid cooler as it allows you to make all sorts of customizations. With the help of the CAM software and its intuitive controls, you can control every aspect of the CPU cooler, including its appearance and performance.

The installation process is quite straightforward. During the installation, you can rotate the pump according to the position of the motherboard. That way, you can set it nicely so both the logo and the image can be visible from the front.

Even though this CPU cooler has only been on the market since February 2020, it has managed to make a good reputation as a reliable and trustworthy CPU cooler.

The Enermax Liqmax III 240 is a liquid cooler that can cool off whatever CPU you get. Its dual-convex fan blades can create an airflow volume pressure of up to 72.1 CFM, whereas the downforce air pressure can reach as high as 1.98mmH2O.

The water block features a dual-chamber which contributes to an extended cooler lifetime. The Enermax Liqmax III 240 uses one of the most advanced thermal technologies – Shunt Channel Technology (SCT). This patented technology effectively stops heat surges and improves thermal conductivity.

RGB lighting can be synchronized with whatever motherboard you get on your desktop machine. The synchronicity can be achieved with the 4pin RGB headers.

The 2400 radiator and the two 120mm RGB PWM fans are covered with Enermax’s five-year warranty, the brand behind this AIO CPU liquid cooler.

All in all, you are looking at a quality CPU cooler. The numerous positive reviews, as well as its five-year warranty, speak volumes about its overall quality.

The list of best CPU coolers for Ryzen 7 5800x doesn’t have any low-quality products. All of these CPU coolers have been reviewed by professional reviewers on the OvrClock team. Moreover, hundreds and thousands of user reviews speak about their quality, performance, and durability. At the same time, each of them is a different product, each with its own specific set of features.

When choosing a CPU cooler, one needs to consider price, performance, cooling technology, brand, warranty, etc. Then, based on your system requirements, you can choose one that will keep your Ryzen 7 5800x CPU cool.

If you want to go for a budget-friendly CPU cooler, then Enermax Liqmax III 240 RGB is the ideal choice. On the contrary, if you desire excellent performance and don’t mind the price, then we recommend the NZXT Kraken Z63 and Noctua NH-U12A. 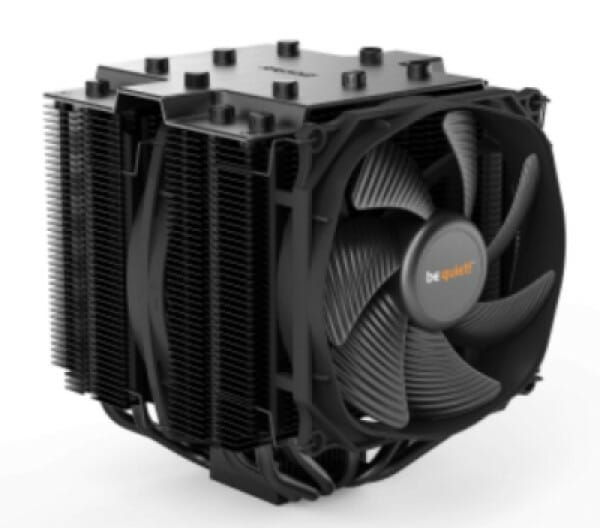 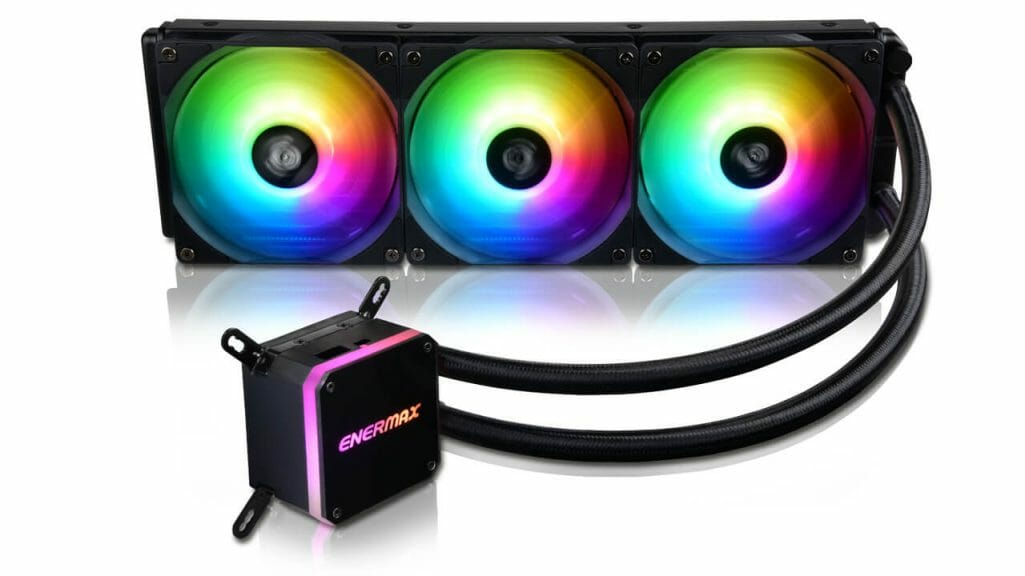 The Ryzen 7 5800x is an eight-core, 16-thread CPU, which is a direct competitor of the Intel Core i7-11700K. It is a good processor which offers a base clock rate of 3.8GHz, and even more when overclocked.

Does it matter which motherboard I get?