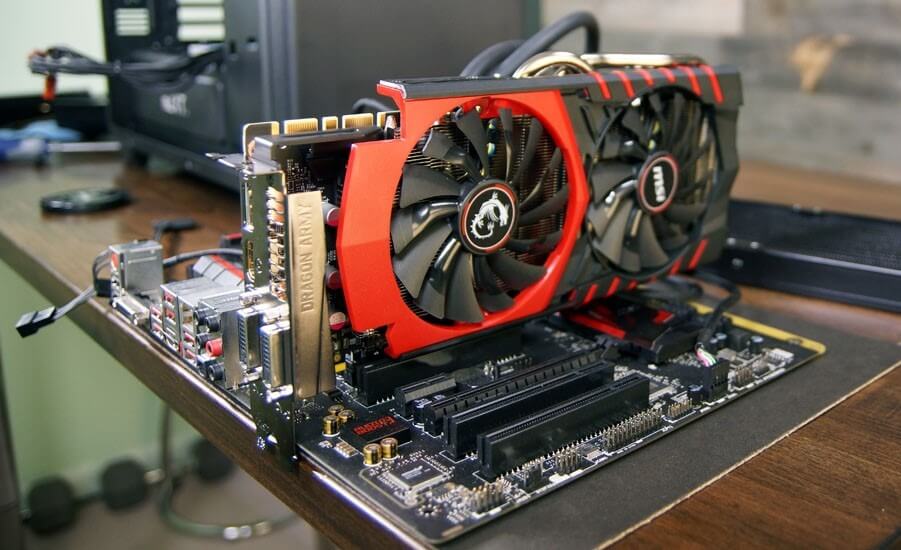 It is a known fact that motherboards are the bedrock of any computer system, as they house all the other components in the PC. Many people would like to think that the motherboard is only a flat piece that holds more important components like the CPU and GPU. While the sentiment might sound valid, a circuit board plays more roles than you think.

One such function involves the motherboard directly interacting with the installed graphics card. The board can alter a GPU’s performance, and PC users often wonder if a motherboard can bottleneck the graphics card entirely.

Can a motherboard bottleneck a GPU at any stage? This piece highlights the possibilities and ways you can manage them. Also, you’ll get to learn the various motherboard sections involved in the process.

What does it mean for a GPU to get bottlenecked? It’s a situation where the graphics card gets forced to operate at a lower speed because a certain connection is not as fast as the GPU. Your computer would show that the card can only run at a fraction of its potential. Most times, the reasons for a GPU bottleneck aren’t immediately apparent to the user.

If you’ve been asking, “can a Motherboard bottleneck a GPU?”, the quick answer is yes. However, we admit that the reality is much more complicated than that. The motherboard itself can’t manipulate a GPU’s performance, but its special ports can do so. The PCI-e port on motherboards is the single main culprit behind motherboard-GPU bottlenecks.

GPU bottleneck effects on your PC depend on a broad range of variables. For instance, higher-end graphics cards are harder hit by bottlenecks than mid-range ones. That’s because the latter group has a lower throughput rate on their PCI-e ports. Mid-range or budget GPUs are less likely to saturate the PCI-e lanes.

Also, bottlenecks might not be an issue if you run programs and games that are more CPU intensive.

The PCI-e connection on a motherboard comes in different types to interface with different components like the SSD and radio cards. The most common PCI-e lane types available on the market today are:

The “x” in the nomenclature represents the number of lanes each model has, i.e., x1 PCI-e has one lane, while x8 has eight lanes. Expectedly, the x16 PCI-e type is the most extensive port you can have on your motherboard.

It’s worth mentioning that certain x16 models don’t have all their sixteen lanes working. Some of them may only offer 4 or 8 lanes at any point. Therefore, it is imperative that you check the motherboard’s product manual to ensure the PCI-e lane specifications. Also, motherboards can have multiple PCI-e slots for as many connections as the user would like.

Furthermore, each PCI-e type has its version, denoting its speed and throughput. Below is a table showing the speed you can expect from each version:

Most modern GPUs require an x16 PCI-e port in an ideal condition. However, they can operate on an x8 type as an alternative, but you can expect bottlenecks as a result. Some motherboard models come with multiple x16 PCI-e slots – three, most commonly.

The recommendation is to plug the graphics card into the first slot. The others would likely run on four or eight of their lanes.

Things get interesting when the user decides to install multiple graphics cards on the PCI-e ports. In a three-piece x16 PCIe arrangement, the top slot runs all sixteen lanes while the bottom one caps out at x4 configuration. Furthermore, The middle port shares its lanes with the top one so that they each use x8 lanes when there are graphics cards installed on both. For clarity, below is an illustration of the setup:

It’s essential that you go through the motherboard’s product page to be sure of graphics card arrangements without experiencing bottlenecks.

Several studies have gone forward to determine how GPUs get affected by bottlenecks on PCI-e Slots and by how much. One of the comprehensive studies by Pudget Systems gathered that higher-end GPUs experienced more severe bottlenecks when they get mounted on an x8 PCI-e slot.

However, the study concluded that the extent of the bottleneck depended on the applications the user ran. Expectedly, GPU-intensive tasks made the bottlenecks more apparent.

Also, plugging in multiple graphics cards on your motherboard would likely bog down the available PCI-e lanes between them, leading to a GPU bottleneck. If your motherboard doesn’t have an x16 slot at the start, the issue will get exacerbated.

Lastly, the Pudget Systems rounds out by stating up to a 30% bottleneck when a graphics card gets plugged into an older PCI-e version. As such, a newer GPU will have the problem with an older motherboard. It’s also worth mentioning that specific circuit boards support both old and new PCI-e versions. You must confirm such configurations in the motherboard’s spec sheet.

Custom PC builders often have to pair their GPU with the right motherboard, as the PCI-e slots determine the card’s performance. You may still have questions like, “Can A Motherboard Bottleneck a GPU?”

Our analysis above shows that the answer to the question is dependent on several factors. The metrics and numbers included can help you avoid GPU bottlenecks and improve your PC’s overall performance.