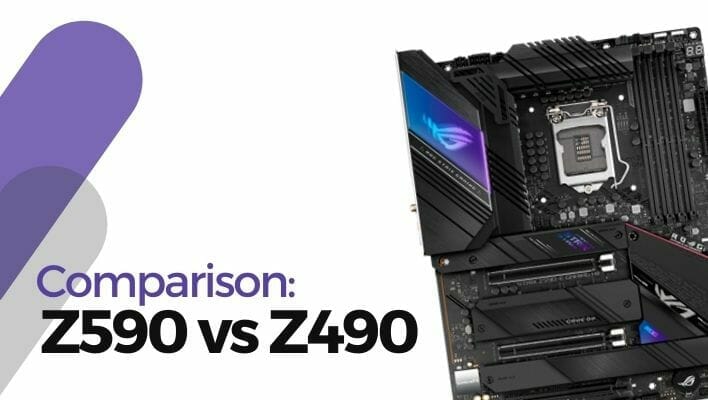 Since Intel has launched its newest 11th generation Comet Lake S Processors, the discussion then shifts to which motherboard will fit best with these chipsets and as we know that motherboard is the core of your build, it necessitates compatibility with components you’re using for instance processor, graphics card, etc.

The main point of interest here is whether the new Intel Z590 motherboard is worth it over the Z490 motherboard because both look pretty similar. Nonetheless, both have some vital differences which make the new Z590 motherboard the latest flagship in the business.

To explain the superiority or the comparison of both, we had to dig into their configurations- like form-factor, socket compatibility, and features such as connectivity, PCI-E support, and onboard Wi-Fi.

More than just primary details, Z590 and Z490 motherboards have a lot to offer, emphasis on which motherboard is better in terms of configuration, performance, and features.

Speaking about one of the most significant elements which is the chipset, the main advantage is that Z590 features DMIx8 while Z490 provides DMIx4 connectivity lines.

So overall the Z590 chipset is a definite winning contender here as it has DMIx8 connection lines, has greater connectivity options, and is likely to run faster in all regards.

The form factor is directly linked to compatibility, as it ensures that whether the board is compatible with the rest of your build. It is something you should have into consideration. Both Z490 and Z590 come in a range of package sizes. The next detail to catch on is with which processor generation the chipset is compatible. Here both Z590 and Z490 chipset are compatible with Intel 10th and 11th Generation Processors.

The form factor is something where both Z490 and Z590 see no difference. Both are compatible with 10th and 11th Generation Processors and have the same package size.

The socket is also a vital part, as it defines the connectivity of the motherboard with all the other parts that include in your build. Both motherboards have the same socket ‘LGA 1200’.

A popular socket with the latest Intel processors and compatible with Comet Lake and Rocket Lake Desktop Processors.

So there is no upgrading with sockets in Z590 as it continues to have the same socket standard.

Now to the defining part, because both these motherboard has a handful of features. So, when choosing between Z590 and Z490 chipset it is features that prove a point.

1. Which is better Intel or AMD motherboards?

When we talk about chipsets these days, there are only two names that come to our mind Intel and AMD. While choosing a chipset, it is critical to choose wisely because down the line the choice will impact the whole build.

Deciding on whether to choose AMD or Intel is mainly focused on which chipset you will be using because each motherboard has a particular socket to which a chipset is compatible.

Recently Intel has been through a rough patch as long as CPUs are concerned because the AMD Ryzen processors provide some high-end performance at a good price point.

Talking about motherboards both Intel and AMD have their line of work and have provided the market with some remarkable motherboards over the years.

As long as performance is concerned the Z590 motherboards have not much to offer since it doesn’t have any newer overclocking feature to add. However, there are some features that can be handy such as four additional PCIe Gen-4 lanes, connectivity with Thunderbolt 4, and three USB 3.2 Generation 2×2.

Time from comparing to concluding, both of these chipsets have a handful of features and have a solid stature.

On the whole, the Z590 is a step ahead of Z490 and is the newest flagship motherboard from Intel but a comparatively more costly option.

Nonetheless, the Z590 is the more suitable option, it has some additional perks to add such as 4- additional PCIe Gen 4 lanes, 3 USB 3.2 Gen 2×2 ports, and maximum transfer rate of 20 GB/s.

Both these chips are backward compatible, they can work with 10th as well as 11th Generation Intel processors.

Thanks for reading, we hope you find this article informative.