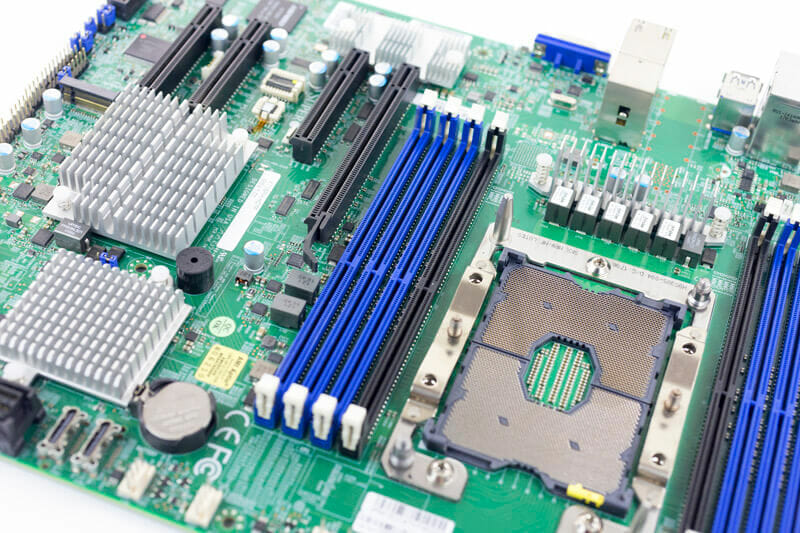 Perhaps the most important component of a motherboard is its storage capacity, which is a key contributor to the overall performance capabilities of a PC. Beyond that, the discussion about motherboard storage can get complex, thanks to the newer storage and data transfer technologies we have today.

If you’re looking to buy a motherboard for your new PC, it’s important that you understand how much storage you’re likely to need for your situation. You don’t need to get too technical with the details, as the basic information covered in this article is enough to help you find a motherboard perfect for your build.

In this article, we explain the main storage ports you can find on a motherboard, the connections they use, and their specific features.

An internal storage system is a storage form for the PC that has its components “on-board” (i.e., within the chassis of the motherboard). The motherboard connects to these storage types by SATA or PCI Express ports.

Some of the common internal storage types we have today include:

HDD (Hard Disk Drives): Hard Disk Drives are one of the oldest internal storage types you can find on a computer. They are mechanical (having physical moving parts) storage devices that store data using electromagnetic waves.

Inside an HDD, there’s a magnetic spinning drum and an actuator. The setup works like a turntable player, where a needle arm reads the grooves of the disk. However, the actuator arm in an HDD doesn’t touch the drum directly but uses the magnets to read and write information on it.

HDDs are reliable, as they’ve been in use for several decades. However, they suffer from low read and write speeds compared to newer technologies. HDDs connect to the motherboard and power supply with SATA cables.

SSD (Solid State Drives): Solid State Drives are another internal storage type commonly in use in PCs today. They use separate IC chips to store data and retrieve them upon request. This technology allows SSDs to have a much smaller footprint than HDDs while boasting higher read and write speeds.

Another key advantage an SSD has over an HDD is that the former isn’t as prone to physical damage as the latter. However, SSDs are “fragile” in other areas, as any sudden power imbalance could render them inoperable; however, this is very rarely a concern unless your setup includes the wrong power setup.

For one thing, the spinning disk on an HDD can’t rotate faster than a certain speed – 10,000 RPM on average. That puts a hard ceiling on how fast your hard disk can handle your files. Also, you’ll always experience some lag as each needle head moves over the disk.

These are the issues SSD drives amply solve. They have no moving parts and use semiconductors instead which makes them significantly faster than the fastest hard disk.

Also, SSDs use flash memory technology, which allows them to retain their charged state even when the computer gets turned off. This feature allows you to read and write data much more efficiently.

Motherboards use PCI express slots to make a connection between SSD modules and the power supply. In recent years, you can also find the smaller and more efficient M.2 ports in SSDs.

You can currently get SSD drives in various models, and with various connections. The most common options are SATA 3, M.2, and NVMe SSD drives. Below we take a deeper dive into how the different connection options compare in the real world.

First, we have to touch on the fundamental concepts of computer storage. Digital technology has developed over several decades, and motherboard storages are newer generations.

Currently, you can opt for any of two storage types: HDD (Hard Disk Drives) and SSD (Solid State Drives). HDDs store your data on physical magnetic drums, while SSDs use discrete integrated circuits to achieve the same purpose.

Each has its unique advantages: HDDs are often more prominent at a lower price, while SSDs have faster read/write speeds and are often more expensive.

However, the computer storage market is drastically changing, and we think it makes more economic sense to get an SSD for a desktop setup you plan to use actively given their prices have been dropping significantly in the last few years.

SATA (Serial ATA) is a hard disk protocol ported to SSD. SATA 3 is the latest iteration in this storage technology, and it works by connecting the power and data cables between the SSD drive and the motherboard directly.

NVMe Storage negates the need for a cable between the motherboard and the SSD drive. Instead, NVMe SSDs interact with the motherboards directly through the PCI-Express connectors. This approach allows for a much faster speed than SATA 3 SSDs can manage.

However, don’t be quick to conclude that NVMe is better than SATA 3 in every way. Each of them has its unique use case. NVMe can queue more data read/write requests depending on how many PCI-E ports it can access at the time. The speed gains you get with an NVMe SSD are only evident with large files, but not as pronounced for smaller file sizes. Therefore, it’s suitable for video and image editing.

The M.2 SSD is technically not a third SSD type, as it uses either an NVMe or SATA 3 protocol. However, it looks distinct physically: it’s much thinner, and you’ll regularly find it in slim laptops and notebooks.

Since NVMe SSDs use the PCI Express ports and SATA 3 doesn’t, NVMe M.2 drives are blistering fast for modern motherboards. If you need the speed on your desktop setup, it’s best to check if the M.2 drive has the NVMe identification on it.

After laying down the technical details of each SSD model, we will recommend which one to get if you’re out for a new motherboard.

NVMe SSDs are much faster than the already-fast SATA 3 drives. But you won’t experience the speed bump all the time, as NVMe only excels when it’s reading/writing large files. Such situations are the only time it can take advantage of the PCI Express connections.

Another critical consideration is pricing: SATA 3 SSDs are expensive, but NVMe drives still cost more. You’ll have to consider if you have the budget for NVMe or can make do with SATA 3.

Overall, SATA 3 SSDs are perfect for everyday PC use, including gaming and light internet browsing. At the same time, NVMe drives are more suitable if you intend to read/write large data files regularly, like during video editing or rendering.

On the other hand, external storage lives outside the motherboard. Instead of connecting through SATA or PCIe ports, it relies on port connections such as FireWire, USB, and eSATA ports.

Both internal and external storage can read and write data to and from the motherboard. However, the speed at which they handle these operations differs based on models and form, with SSDs generally much faster than HDDs.

Also, both storage options are under the secondary storage category. That means they don’t have access to the PC’s temporary storage or RAM, however, this is the whole point of these types of storage connections.

Performance varies across the different storage types available. So how do you measure storage performance when you’re setting up your PC? The only common metric you can use are the read and write speeds.

The storage system reads the data you input into the memory and writes it to another location whenever you need. The speed with which both operations get carried out determines how efficient the storage would be in the long term.

By that logic, HDDs have lower performance with read and write operations. Also, they have largely unpredictable read and write speeds, and we can only make an estimate based on the rotating speed of the mechanical drum. For instance, when the HDD hits 7200RPM, it may yield read and write speeds of approximately 80-160MBps, but it really depends.

On the other hand, SSDs can maintain high transfer speeds with accurate readings. A typical SSD can reach up to 550MBps read and write speeds. If you’re using a more recent M.2 connected SSD, that number could go up to 7500MBps, which is really as high as you’d need to go for any non-enterprise use cases.

What’s the cost of high or low read and write speeds? With the performance you get on any motherboard storage you choose, there’s an added cost. You must understand the tradeoff, allowing you to make a better purchase decision with regards to motherboard storage.

For starters, HDDs are cheaper to buy and run due to their lower speeds. You can get more storage for less money as a result. By comparison, SSDs are expensive, and the cost goes higher the faster it’s read and write speeds get. If you go for the latest NAND SSD, maintenance costs are also prohibitive in our team’s experience.

However, prices are subject to the market’s demand and supply. Gradually, SSD prices are getting lower due to the lower demand, and increased supply in recent times. You can get an excellent deal on one if you search long enough.

Other Points to Note

Motherboard storage systems don’t exist in isolation. There are other components that need to be present for them to work. We’ve mentioned the various ports, and they need to bridge a connection between the motherboard and the power supply.

Some of the other components necessary for a storage’s optimal operation include:

Cache: Cache is the component that holds temporary data for the secondary storage in a similar fashion as the RAM. Generally, the bigger the cache is in the storage drive, the quicker the system can read and write data.

NAND Memory: NAND Memory is present in modern SSDs. It replaces the integrated circuits with discrete cells for better power efficiency. Digital cameras and USB thumb drives are examples of devices that use NAND Memory.

Storage types for your motherboard don’t always have to be about size and storage capacity. You’ll also have to consider the speed and transfer protocols they use to give more insight into getting the best option for your computing needs.

Overall, we’d recommend that you settle for SSDs over HDDs. That’s because the former is newer, faster, and more efficient, which makes up for the slightly higher cost. However, you’ll also have to choose between NVMe or SATA 3 on the SSD side of things.

The comparisons and technical details highlighted above can help you understand which SSD option is most suitable for you and how you can use either of them in an M.2 drive form factor for your motherboard.