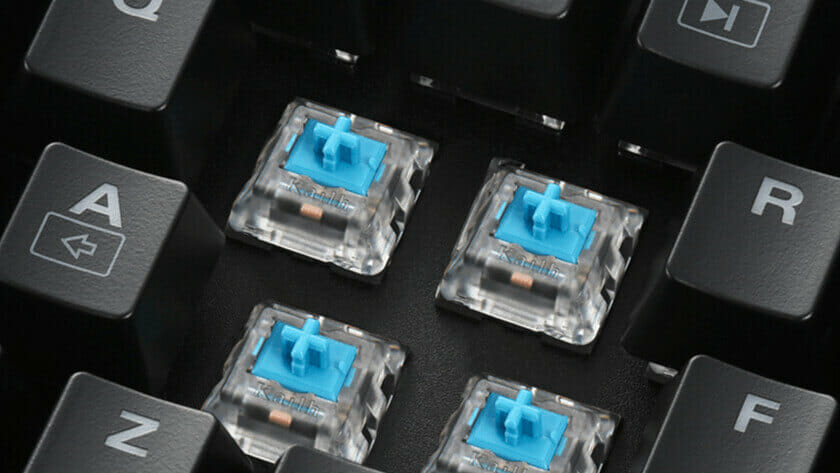 As a gaming enthusiast, you might already be familiar with the hassle that comes with getting your gaming equipment just right. Be it setting up your gaming PC with the perfect keyboard, graphics card, motherboard, or a comfortable gaming chair to last you hours of play — there’s so much to think about!

If you are here, you’re probably in a conundrum regarding your mechanical keyboard. Switches on any mechanical keyboard can significantly affect your gaming performance, and in the era of MMO (Massively Multiplayer Online) and FPS (First Person Shooter) games, it has become even more integral to find the perfect keyboard switch for you!

Rather than dismissing the prospect of selection as ‘it depends on preferences’ or ‘it doesn’t matter,’ this article will try to understand the nuances of switches and then objectively determine whether blue switches are good for gaming. So, let’s first understand what switches are, their role in gaming, and how different switches serve different purposes.

What are Mechanical Keyboard Switches?

Mechanical keyboard switches can simply be understood as the mechanisms under all the keycaps of a mechanical keyboard that enable you to type faster and with more precision by making the clicking process more efficient.

Mechanical keyboard keys work by pressing individual switches present under them. A keyboard switch consists of a stem, base, and spring, and these stem’s shapes determine the type of switch you have. Then this stem makes contact with the spring, which in turn registers the stroke. This is just technical jargon for a lot of you, so don’t worry if all that doesn’t make too much sense. Keep reading to get into the real backbone of this article!

What are the different types of Cherry MX Switches?

Cherry is a top-rated computer parts company, and being a gamer, you might have heard of its name before. They’re the company that completely dominates the switch industry through their Cherry MX Switches. So the blue switches keyboard whose gaming viability you’re looking for? Well, they’re the product of this company.

Cherry named its range of Cherry MX Switches after their stem color. Hence the various switch types offered by the company are:

Cherry MX Brown – They are the middle ground between Red and Blue Cherry Switches, which has a quiet yet noticeable feedback sound with some resistance and feedback.

Are Blue Switches Good for Gaming?

Now that you’re familiar with what exactly we’re looking at, we can get to the real question — Are Blue Switches Good For Gaming?

Despite being very popular and loved for their aesthetic appeal, blue switches are not recommended as a gaming switch. You can still play with them, but your gaming experience won’t be smooth, and the constant noises can be pretty distracting. They are also hard to press, and during fast-paced games which require quick reflexes, the extra feedback may lead to delayed response times or even an unregistered keystroke.

Why are Blue Switches not good for gaming?

Several reasons factor into dismissing blue switches for gaming. Read the following explanation to understand why it might be a bad idea to integrate a blue switches keyboard in your gaming setup:

The Characteristics of a Blue Switch

What makes blue switches a bad contender as the best switch for gaming is its mechanism? These switches make an apparent affirmation through a clicking sound to indicate that a key has been pressed.

You need to put much more pressure on blue switches to register a keystroke, contrary to its linear counterpart (red switches). This is a deliberately designed system to ensure that while typing, you do not mistype or press multiple keys at once, which leads to typos. This makes the blue switches suitable for typing, but not so much for gaming.

We can compare the Cherry MX Blue and Red Switches to understand why blue switches aren’t suited to be a gaming switch.

As you can understand from the table derived from Cherry’s official site, compared to the red switches, blue switches have higher pre-travel times. Despite having the same button travel distance, blue switches take longer to activate. And while 0.2mm might not seem like a big difference, in gaming, it can be the difference between a game lost or won.

The force needed for the activation for red switches is almost 25% lower than blue switches. This would mean that the red switches will register clicks much quicker, and your fingers will probably be much less sore at the end of a long gaming session.

OvrClock‘s contributors and gamers, in general, often do not prefer the blue switches because of the sheer amount of noise that they make. For any gamer, it is crucial to hear every footstep to take down their enemy, and every small cue that danger is on its way. But blue switches often make them lose this advantage as the switch noises drown out these in-game noises.

The noise can also be distracting, which is arguably the one thing you should never lose when gaming.

And if you are a team player, you need to avoid blue switches point-blank. Playing and talking can be a nightmare with these switches. They interrupt your voice and make your teammates lose out on valuable info, and can even make it hard to hear what your teammates are saying through your speakers.

Now that we have established that blue switches are not suitable as gaming switches, the question arises — What is the best mechanical switch for gaming?

Out of the switches offered by Cherry: the Red, Brown, Black, and Yellow Switches are the best mechanical switches for gaming. They all have smooth actuation and a high level of consistency that allows for superior control and a faster response rate from the keystrokes.

Linear switches of any kind are your best bet while gaming, owing to their actuation. But for starters, we would recommend going for optical linear switches. These kinds of switches typically actuate through light, which makes for a better, but slightly less reliable typing experience.

If not optical, then you can also try out speed switches. They, too, have a lower actuation distance, thus reducing the key travel time. There are other super-specialized switches on the market that are good for gaming but try using the linear switches if you have the option as they are tried and tested by our team. If you’re looking for the best RGB gaming keyboard, be sure to check out OvrClock’s article on it!

Which Switches to Avoid While Gaming?

As already mentioned, blue switches are not the best switches for gaming, and if you can avoid them, then stay far away. You can also avoid going for tactile switches as they tend to impact gaming due to their lack of consistency and smoothness in actuation.

Keys with brown, orange, or clear colors have these tactile bumps. And while these are preferred for fewer errors and faster typing, they are nothing but hindrances during gaming. This tactile bump is a small friction you feel when pressing down on the key, which generally represents the actuation point.

What Do We Think About Blue Switches for Gaming?

As already mentioned, blue switches are not the best for gaming, but they aren’t entirely useless. If you have already bought them, all hope is not lost. In our opinion, no switch can be deemed utterly unsuitable for a task. Blue switches might slow you down and have minor inconveniences, but they cannot be rejected outright. If you still love the clicking sound of keys and the satisfaction that comes with it, then blue switches are still a good option.

Also, considering that your ability to play a game determines your success more than the switch you have, it doesn’t really make that big of a difference. So, if you’re still new to gaming and already own a blue switch keyboard, then keep it with you for a while. However, if you’re setting up a new gaming PC build, then there is no harm in avoiding a blue switch keyboard outright.

To sum it up — from a technical perspective, blue switches are not ideal for gaming compared to their counterpart of red linear switches. However, from the point of view of an occasional gamer, it doesn’t actually make a huge difference. Only if you are a professional who is susceptible to even the slightest changes, then blue switches will actually make a difference.

But, if you are a part-time gamer with studies or work on the side, blue switches or even brown switches are still a good choice. Take your time learning the art of gaming, and once you are a pro, get yourself a linear switch!