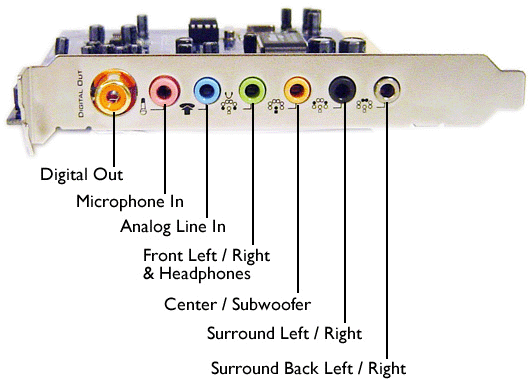 Prospective PC owners should care about a motherboard‘s audio input and output capabilities, as it’s a significant part of the computing experience. Modern motherboards have more audio ports and specifications that seek to improve the desktop computer’s audio performance so audio capabilities aren’t as much of a concern as they used to be. This article explores different types of motherboard audio ports to help you learn more, and make an informed decision about what fits your needs.

How do you get the right motherboard audio for your PC setup? The information in this article might help you choose the right option for you. In the piece below, we’ll discuss the various audio ports you can have on a motherboard to help you understand it better.

One of the most common audio connection types you’ll find on a motherboard is a 3.5mm connection. They’ve been around since the early 2000s and would often come in sets. Notable examples are the Line in, Line out, and Mic in audio ports.

The Line In Connection (Pink): The line in audio port allows the motherboard to connect to external devices like CD players and microphones. The port enables data transfer from those external components to the processor.

The Line Out Connection (Lime Green): The Line out connection handles external devices like headphones and speakers. This port allows the motherboard to transmit signals to those components.

Mic in Connection (Grey): This port is also known as the audio recording connection for microphones.

Some motherboards also include additional 3.5mm audio ports (called jacks) for more audio features. These advanced connections are suitable for more powerful surround speakers. Below is the main example of this category:

Rear Audio Port: The rear audio port services the center speaker or subwoofers in the system.

Side Audio Port: These handle any other side speakers present in the setup.

These advanced ports are rarely necessary for most casual setups, but are useful if you plan to have multiple speakers connected to one PC.

Quarter-inch connections (6.3mm) are only necessary if you need more audio power. Motherboards may include a 6.3mm audio port in their layout, however, it is extremely rare. Generally, these quarter-inch cables serve professional-grade audio equipment and support higher-quality audio output.

Some motherboards include proprietary audio connections in their architecture. In such cases, the manufacturer omits some of the 3.5mm connections and introduces a different specification. As a result, audio Input/Output gets determined by a different metric.

Proprietary audio connections make the motherboard expensive and only suitable for a fraction of the market. An example is the S/PDIF port (Sony/Philips Digital Interface), and it would be advisable to steer clear of these unless you have a good reason for restricting your audio connectivity options.

You can expect new motherboards to have some audio support and function. However, some modern motherboards have their sound cards directly embedded, while other high-end options don’t include one. In such cases, you’ll need to connect an audio add-on card through a PCI-E or any special audio connector available.

Whichever audio architecture your motherboard has, it handles two kinds of audio input/output: analog and digital audio. Typically, computers are digital machines, so they can only produce digital audio. But the user can only experience the output in analog.

Over the years, manufacturers have developed digital-to-analog converters (DAC) to help interface between computers and the output they give. However, modern motherboards have a more efficient DAC channel known as audio Codecs (short for coder/decoder).

What Codecs should your motherboard have? How does it affect the audio output quality? In this article below, we’ll look at some of the more common audio codec families and their technical details.

Audio Codecs are responsible for analog audio functions on the motherboard. They are small square chips, often with the dimensions of 7x7mm. Each audio codec has its technical specifications, which ultimately determine the audio quality of the motherboard.

It’s essential to know these specs and compare them when you’re out to pick a new motherboard. Below are some of the more common audio codec manufacturers you can currently find on the market:

ADI (Analog Device) or Soundmax is an audio codec manufacturer that’s been around for an extended period. Their codecs have model names starting with “AD”, followed by model numbers. Below is a table showing the specs of ADI/Soundmax codecs:

Realtek Audio is perhaps the most popular audio codec manufacturer currently on the market. They’ve been around for a long time, and some of their older motherboard offerings were under the name “Avance Logic”. However, newer and legacy Realtek Audio codecs use the model code “ALC.”

Below are examples of Realtek Audio codecs and their technical specs:

Realtek released the ALC1200 and ALC1220 in 2017 and 2018, respectively. They’re newer and differ from the other models in the table above. However, what does it mean to have either of them on your motherboard?

To begin, the ALC1200 is an entry-level codec, although people confuse it with the more powerful ALC800 series. It’s got 10 DAC channels with 110dB SNR output. These features allow for lossless DVD and Blu-ray audio playback.

Furthermore, ALC1200 supports multi-streaming, thanks to its 7.1 channel playback feature. If you’ve got an Intel or AMD chipset, the codec will request host audio. Even more, you’ll get a plethora of third-party support like Synopsys Sonic Focus, DTS Surround, and Nahimic 3D.

While you might think the ALC1220 is a significant upgrade to 1200, they have many similarities. The ALC1220 has the same 10-channel DAC support and multi-streaming. You’ll also get DSD (Direct Stream Digital), which lets you consume high-definition audio content without quality loss through Analog/digital converters.

However, you’ll also find significant differences between the ALC1200 and ALC1220, mainly with the SNR (Sound-To-Noise Ratio) and DSD Streaming. Below is a table highlighting all the differences you can expect from both Realtek Audio codecs:

From the table above, it’s evident that the ALC1220 uses a more effective capacitor-free port. It allows for more clarity in output with fewer pop effects. Also, you can use headphones with more significant 600 ohms drivers on the ALC1220, which isn’t possible on 1200.

Overall, the ALC1200 is suitable only as an entry-level codec. It lacks some standard audio features that other Realtek codecs have but makes up for it in price and economy. If you’re looking for a motherboard with “good enough” audio capabilities, the ALC1200 would fit perfectly.

You can expect pretty much every motherboard to have some level of audio capabilities. However, it helps to you know the specific audio support you want when picking up a new motherboard, so you can ensure that the compatibility is there. We highlighted the audio connection types, with some examples of codecs you can currently find on the market, together with their technical details. This will help you make this decision-making process easier.

If you have a simple or surround speaker setup, any motherboard with 3.5mm ports would suffice. However, if you need higher audio fidelity, check for 6.3mm connections which only limited motherboards have.

Most of them have high-end audio features, but one of the more common motherboard audios you can buy is ALC1200 and ALC1220. They are entry-level and affordable, with 1220 having slightly better HD audio features.

Both still suffer from Realtek’s high noise floor, which wouldn’t be an issue if you don’t take too many blind audio tests on your computer.