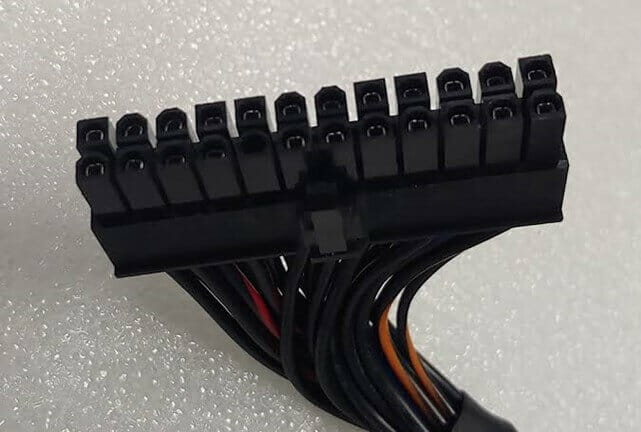 How Many Pins Are There In The Power Supply Connector of Most Motherboards Today? The short answer is: likely 24 pins, or potentially 20 pins. 9-pin and 25-pin connectors have been phased out over time. For more information, continue reading the rest of the article.

Before getting into the number of pins in the power supply connectors of modern motherboards too much beyond a number, we need to understand ATX configuration, connectors, power, etc., as different PCs have a different number of pins. So let’s start with the basics.

ATX stands for Advanced Technology EXtended. Intel developed this power supply configuration back in 1995 when it completely changed the motherboards industry. It was a game-changer back then as it introduced significant changes in power supply, desktop computer enclosure, and motherboard design. This new specification describes the connector interface, I/O panel, mounting points, and dimensions between a power supply, motherboard, and a PC case.

Since its introduction in 1995, ATX has stood out as the most popular motherboard design. Of course, there are other designs, but they are for boards that are somewhat smaller such as the mini-ITX, Nano-ITX, FlexATX, and microATX. The dimensions of an ATX motherboard are 305 × 244 mm, but you can read more about them here. Because of that, a microATX board can fit in most ATX chassis, but the other way around is not true.

However, there have been numerous ATX specification revisions since the introduction of the first one. The 2.2 version is the latest ATX motherboard specification. The 2.53 specification is for the ATX12V power supply unit, released in June 2020. Then there is the extended ATX (EATX) which is 305 × 330 mm in size. That makes it the bigger version of ATX, and generally reserved for absolute beasts of motherboards such as the MSI MEG Z390 Godlike E-ATX discussed here.

The EATX is the default size for dual-socket systems, thanks to its size. However, there are still some dual CPU socket motherboards that have been incorporated in ATX.

Back in 2004, a new specification was introduced by Intel – the Balanced Technology Extended (BTX). This was supposed to be the successor for ATX. Some manufacturers even accepted it as such. But soon enough, the people at Intel had a change of heart and discounted BTX. Consequently, ATX remains the standard for PCs despite being founded back in 1995, and there has been much speculation about when the new version will come out for at least a decade, if not more.

The 12V and a 5V USB are also part of this specification, but they are on standby. The 12V supply is used as a reference voltage for some sound cards and RS-232 ports. The 5V supply is a soft-power feature for when we turn off the PC. The 5V supply is also used to power the real-time clock which is humming in the background even when your customer is powered off. The idea with this is to preserve the CMOS battery’s charge.

Power Connection to the Motherboard

The LDX and AT standards featured a power supply connection to the motherboard that was quite troublesome. The thing was, both LDX and AT had two very similar connectors. Because of that similarity, there was a significant risk of interchanging the connectors. When that happened, a short circuit caused irreversible damage to the motherboard. On the other hand, ATX relies on a rather big connector that can be connected only in one correct way. This new connector supplies 3.3 volts, so there is no need to draw voltage from the 5-volt rail anymore.

The original AT standard featured only an expansion slot and keyboard connector. As a result, any additional parallel and serial ports needed to be connected via flying leads. They needed to be mounted either on unused expansion slots or spaces made available by the case.

ATX allowed motherboard makers to have all these ports placed in a single, rectangular area. The ports were conveniently located at the back of the system and had a pretty self-explanatory arrangement.

I/O shield or I/O plates are types of snap-out panels fitted in cases. The I/O plates typically come with the motherboard and can be replaced to fit a certain motherboard if necessary. That does not mean that the computer will not function properly without a plate. The truth is, the computer will work properly, just that there will be gaps in the case. That can lead to RFI/EMI screening which may attract dust, dirt, or all sorts of unwanted foreign objects. An integrated I/O plate is a feature with some ATC motherboards.

The introduction of the modern ATX motherboards meant that PS/2-style connectors were obsolete. They got replaced by the modern universal serial bus. Both 9-pin and 25-pin parallel ports got also phased out of modern motherboards. They were replaced by onboard peripheral ports such as USB ports, video ports, audio ports, eSATA, FireWire, Wi-Fi, and Ethernet.

A modern ATX power connector comes with either 20 or 24 pins. The number of pins depends on the power needed for the CPU. In past PS and motherboard specifications, users could turn off or turn on their personal computer only with the help of a built-in piece of hardware. Newer ATX specifications made it possible to incorporate new options for turning the computer off and on. The new ATX specification brought Wake-on-Lan technology and new software that enable starting and shutting down the computer without pressing a dedicated button. Moreover, unlike older connectors, the latest ATX power connectors can be plugged only in one orientation.

A modern ATX power supply is highly durable and can simultaneously supply power to every component on the motherboard. They can last for years, often outliving the motherboard itself. Then there is the fact that ATX power connectors are quite robust. Unfortunately though, the typical ATX supply is so big that it uses most of the computer’s chassis. Plus, the power supply unit is much heavier than any other part of your computer.

So, the final answer to how many pins are in the power supply connector typically used on most motherboards is 24. A motherboard with 20-pins can also be considered a modern one, but that’s not that common nowadays. Therefore, twenty-four (24) is the proper answer.